Why It Doesn’t Feel Good When Someone Else Succeeds


“If you haven’t got anything nice to say about anybody, come sit next to me.” –Alice Roosevelt Longworth

Almost everyone knows the feeling: A friend or colleague has been promoted, has had some success, now has a bigger house, or is making more money, and rather than feeling happy for them, you’re depressed and angry—and part of you would really like to see them fail. 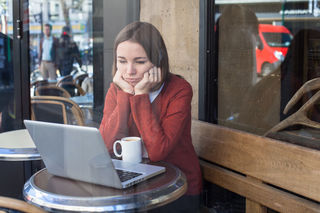 You feel embarrassed about these envious feelings; you can’t admit them to your other friends, and you certainly wouldn’t tell the target of envy. We are not supposed to feel this way, you have been told. But then you have this feeling, and it eats away at you.

You find yourself thinking:

And then you have these thoughts about yourself:

So now you think: “What kind of person am I that I don’t want someone else to succeed?” You are a normal person, because envy is everywhere. Kids playing at a game sometimes feel better if they and a friend both lose than they do if the other kid wins, and adults can feel the same way. We often have a hard time not being the winner. When we are envious, and we think of the world as a zero-sum game: If she wins, I lose. And it seems that rewards are scarce.

1. Depressive envy (“I feel like a loser compared to her”).

When someone you know does better than you, it often feels like you are a loser, a failure, or inferior. You think that their success reflects your failure.

2. Hostile envy (“I think she manipulated her way up”).

Because the other person’s success has resulted in your feeling that you can’t stand it, you may want them to fail. You enjoy hearing about successful people getting divorced, arrested, or even having accidents. Schadenfreude is tempting, because if the other person fails — after succeeding — we feel better knowing we both have “lost.”

This is a neutral kind of envy; you observe that someone else has succeeded, and you admire them and give them credit for what they have done. Benign envy leads us to pay attention to what the other person is doing — because we often think we can learn something.

Many people experience both depressive and hostile envy. For example, one man described how he felt depressed when he thought about a colleague who got promoted. He then acknowledged that he also wished his colleague wouldn’t continue to succeed.

Whom Do We Envy?

We tend to envy people with whom we compare ourselves. Your social comparison group is the group by which you measure yourself, so you might envy a colleague, a sibling, a classmate, or one of your in-laws. We envy achievements that we think are possibilities for us — but we don’t feel confident in achieving them. For example, you might not envy someone who wins the Nobel Prize, because they are out of your league, but you do envy a classmate who got promoted in your shared field. We are more likely to envy someone when we think that their advantage is not deserved, since our envy often carries with it the sense of injustice.

How Does Envy Affect Us?

As mentioned earlier, envy often leads us to become depressed, anxious, and angry. And we ruminate about what has happened. Typical thoughts in our rumination are: “I can’t believe that they got promoted”; “How could this happen?”; and “I can’t get my mind off of this.” We dwell on the unfairness or our sense of futility. We avoid seeing the other person, because it reminds us that we are falling behind. We complain to other people about this — perhaps alienating them with constant complaints or, in some cases, forming alliances with other people who are equally envious. We may even give up competing altogether, because we think that it just reminds us of our sense of failure or our belief that we can’t stand the unfairness.

How Can I Challenge My Envious Thoughts?

Just because you have negative thoughts doesn’t mean you have to believe them. The advantage of cognitive therapy is coming up with more helpful, more adaptive, and more realistic ways of thinking. Look at the table below and see if any of the negative automatic thoughts are familiar to you. Then look at the rational and adaptive thoughts that can help you move past your envy. 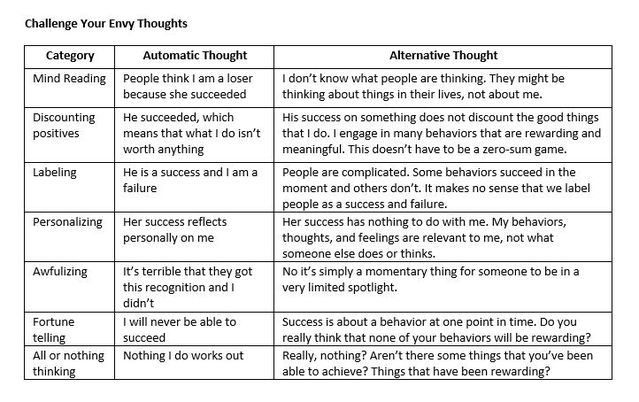 "Stress granule research is exploding right now, but there's still a lot we don't know regarding what they're made of and how they work," says Dr. Grabocka, who is a researcher with the Sidney Kimmel Cancer Center - Jefferson...