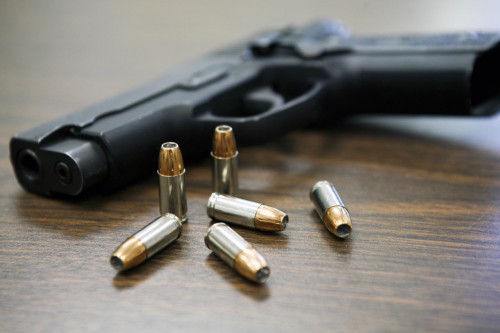 By Daniella Dueñas and Leila Katibah

WASHINGTON, DC – Earlier this month, the National Academies of Science, Engineering, and Medicine panel “Diffusion and Availability of Firearms: Existing Explanations and Methodological Limitations” discussed issues concerning the role of firearms in crime trends in relation to the COVID-19 pandemic.

Appearing via Zoom, the first panelist, Dr. Jens Ludwig, is a professor of social service administration, law, and public policy at the University of Chicago and director of their crime lab. Ludwig noted data collected in Chicago has raised a number of hypotheses on crime and violence during the pandemic.

The data on gun violence in Chicago, Ludwig said, shows a dramatic spike during March. 2020, the start of the pandemic, when stay-at-home orders were issued. A key point from this data is that gun violence was on the rise even before the police murder of George Floyd on May 25, 2020.

The data, he added, suggests gun violence seems to start with some sort of altercation as the result of social frictions, and the pandemic exacerbated existing social frictions. For example, during the pandemic, the criminal justice system exhibited massive disruptions, leading to a decline in interactions with police and social services, he said.

And he theorized decreased social interactions, coupled with social frictions, may lead to mental health problems, and people afflicted with mental illness are most likely to be involved in gun violence, either as victims or offenders.

Ludwig asserted this explanation helps make sense of changes in behavior outside of gun violence, such as student misbehavior leading to an increase of teachers quitting, the increasing amount of traffic fatalities yearly, and airline fights mid-flight.

And because the pandemic disrupted the criminal justice system and social services, as police and social services were less able to intervene due to public health concerns, there was a decrease in de-escalation, and an increase of guns in public places.

Ludwig argued it is plausible that this reflects an increase in illegal arms carrying, creating a literal arms race.

The second panelist, Michael Sierra Arrevalo, is an assistant professor of economics at the University of Texas, Austin, who focused on patterns in firearm availability and firearm crime.

And, this does not include the larger influx of stolen firearms, about 500,000 per year. Arrevalo noted there is fairly limited research on the relationship between firearm purchases during the pandemic and gun violence.

In an analysis of firearm trace data, which traces firearms to crimes committed with them, it was revealed that guns sold in 2020 quickly turned up at crime scenes, he cited, and data suggests during 2020, the time period between when the firearm was sold and when the firearm was used, referred to as “time to crime,” was on average less than three months.

Arrevalo noted that previously the average time to crime was three years or less, which was considered a short period of time. Additionally, in 2020, newly purchased firearms were more common among traced firearms than in the past.

Arrevalo addressed how increased right-to-carry policy across states, in addition to permitless carry, can lead to increased firearm assault, homicide, and theft, and decreased clearance rates for violent crimes. Although, there is currently no Covid-era or post-Covid analysis of the correlation between the right to carry and firearm violence.

He added, in fact, American support for law enforcement is currently at its lowest level in 30 years. According to his studies and findings, this is largely due to the Black Lives Matter Movement and budgetary priorities including efforts to defund the police.

Williams also found that with shifting post-COVID-19 challenges to public safety, there has been an overall decrease in serious crime, but a 45 percent increase in gun homicides. Furthermore, the victims of the homicides were disproportionately Black.

In his research, he found that if law enforcement were to be held responsible for public safety conditions, it would be significant to look at factors such as police force size and officer incentives and responsiveness.

For the former, Williams said increasing police force would lead to a decrease in crime, but because of issues of police employment and visibility there have been issues, including that officer incentives are difficult because of increased gun proliferation, regulation of secondary firearm markets, and line of duty officer mortality.

Lastly, because of recent issues of high profile police shootings and homicide, the public has been questioning police legitimacy. As a result, Williams argues, the ability of law enforcement to confront and decrease gun violence is shaped especially by police force size and incentives.

The last speaker was George Mohler, a professor of computer science at Boston College who tackled the issue of the stability of gun violence hotspots over time. Mohler pulled data from the cities of Chicago, New York, Los Angeles, and Philadelphia between the years of 2016 and 2021.

Mohler explained this could be due to random choice and that essentially there were no changes pre- and post-pandemic with the stability of gun violence hot spots.

Mohler said hot spots played an important role in looking at shootings during the pandemic, and that these hot spots were in the same areas with similar demographics pre- and post-pandemic.

Despite, he explained, the fact that there were no big changes pre- and post-pandemic, the Gini index of spatial concentration highlighted that there were still high rates of gun violence disproportionately affecting Black and Hispanic people.

These shootings were taking place in minor areas of the overall city. According to data during the pandemic, Black and Hispanic populations accounted for 50 percent of shootings.

He cited literature on contagiousness of gun violence, explaining that Chicago, for example, with one shooting would lead to 0.63 secondary shootings by analyzing social networks. In another academic article, Washington D.C. was cited to have a reproduction of 0.13. Some limitations of his studies were that it focused on smaller subset parts of cities and that they may have missed the effects of non-local networks.

The final part of the panel included a Question and Answers session with questions coming from the public and individuals physically present at the panel.

“We’ve heard about fairly dramatic changes in crime since the pandemic began and then some bounce back, returning to more normal levels,” began Ojmarrh Mitchell, a professor from Arizona State University, “That’s at the national level. At the city level we’re seeing variations between cities.”

At sub-city levels, he explained, depending on neighborhoods where there is more economic disadvantage and a stronger demographic of Black people. The question was: What accounts for these variations?

Williams responded to the previous observation by noting that there are certain facts surrounding differences in homicides with a number of different factors. He emphasized that people have a preemptive motive to stay alive and that people will make strategic decisions depending on what another group’s decision is on the use of violence.

He said clearance rates are also a factor of differences in homicides. Low opportunity costs of committing a homicide are incentivized only if clearance rates are not very high. Lastly, groups may be more sympathetic to certain groups of individuals.

Professor Mohler expressed that he was a bit surprised because spatial patterns did not change a lot after COVID-19, but that despite this lack of change there were still increases in gun violence.

Ludwig explained how it was important to think not about crime that occurs given certain neighborhoods, but “the impact of crime in different neighborhoods” and that the disparity was widening even further if you look at victims of gun violence by their neighborhood of residence instead of where it occurred.

A powerful question by the panel asked, “Given the proliferation of guns and the fact that our historical heavy-handed law enforcement response often generates great social cost… Is there a way to increase public safety and reduce gun violence in a way that won’t result in long-term social harm to communities of color, via increased police contact and incarceration?”

Mohler was the first to answer the question, stating that there were civilian violence interruption efforts or cure violence community groups such as “GRID” and other programs in different cities that help with public safety efforts.

Arevalo chimed in, stating that cooperative efforts between police, social services providers, and local community leaders have focused deterrence on gun violence. Other programs promoting cognitive behavioral therapy to reduce aggressive behavior are one of the many ways to begin to unravel the issue with violence.

Ludwig stated with more police on the street, arrests for serious crime decreased, but that there would be an increase for low-level crimes. This, he added, suggests that broken windows policing is not a key pathway to reduce crimes such as homicide and, consequently, law enforcement should be moving away from arresting for low-level crimes and offenses.

— Dissident Voice Bruce Lerro writes on crafting linguistic propaganda by boiling, freezing and muddying language CAN language limit thought? IF A dogmatic belief system can narrow the kind of vocabulary used, can language itself limit the kind of...

DUBAI: Although mental health issues present a significant challenge to productivity, a benchmark survey in Saudi Arabia has revealed yawning gaps between the services that human resources departments claim to provide and what employees believe is actually on offer, with...

The COVID-19 pandemic has brought mental health issues to the fore. But as more people have been willing to acknowledge their struggles, the provision of mental health services has become a major challenge. Dr. Robert Shulman, director of clinical...

Toronto’s future depends on having a safe TTC

If we let the TTC go down the drain, the whole city won’t be far behind.That’s what’s at stake in the crisis around safety in Toronto, and especially on the subways, streetcars and buses of the Toronto Transit Commission....